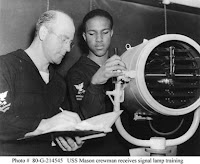 My dad served as a signalman on a ship in the Pacific during World War II. He was on duty one night when he received a message that needed to be taken to the captain immediately. The captain and most of the ship’s crew were down below, watching a movie. He was booed as he walked into the room and interrupted everyone’s good time. He ignored the comments and shouts of his fellow navy men because he knew the message was important. In fact, it would change their lives. The Japanese had surrendered.

My dad died ten years ago of cancer and the days that stir my memories of him more than any others are Memorial Day, Fourth of July, and Veteran’s Day. He shared a few stories of his service, some of them were funny, some of them touching. Each of them I treasure with pride.

FOR WRITERS
Capture the stories your parents tell. You might not ever publish them, but they will make memories you can pass along to your children and grandchildren. These memories may be some of the most valuable stories you ever write.