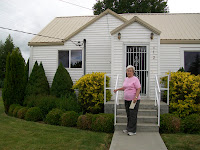 For 63 years my mother has lived at the wrong address and didn’t know it. This past week she moved from 810 Villard to a new address and a new street all without leaving her home. At first she was upset and wanted to fight this discovery by the city council when they mapped the town. Letting everyone know her change of address was going to be difficult. How would the UPS man and the florist delivery person find her?

That wasn’t the only change she had to face. This weekend my husband helped her erect a mailbox in front of her house. Starting July 1, her mail will be delivered there instead of her post office box in town. Sounds convenient. Now she doesn’t have to drive, or walk, the half-mile downtown to collect her mail every day. This will be especially nice when the weather turns stormy and the roads are icy. Well, that’s not how she sees it. The daily trip to town is an excuse to get out of her house.

She lives by herself in the house where I was raised, the house that my dad built board by board and added onto as his family grew to eventually include three daughters and four sons. She’s reluctant to give it up because once a year we all come home for the June Picnic, a community celebration. Where else could she live that has five bedrooms and room for a tent in the backyard for the grandkids? She admits she gets lonely, but she wants to hang onto her home as long as she can. She understands that getting out keeps her mentally healthy.

But that’s not the only reason she enjoys the post office. It’s also the center of the community. She often runs into people she knows and she can chat with them and find out what is going on. She keeps up with who is in the hospital, who has had a new grandbaby, who is out of work, or who is new in town.

Even if she doesn’t run into another person, the post office is where everyone posts what’s for sale, upcoming events, and announcements. If she wants to know what’s going on, she reads the bulletin board. It’s a fount of information. Plus, that’s how she found the man who mows her lawn.

Now she will have one less reason to go to town. Moving is hard even when you don’t have to pick up a couch or a mattress and put it in the back of a pickup. But my mom has a good attitude. I’m sure she’ll find other reasons to stop into the post office. Maybe she’ll mail more letters to me.

FOR WRITERS
Today is the Fourth of July. Editors are on the lookout for articles with themes they can print in their July issues. Keep an ear open for stories during this weekend which you can write up and submit for next year’s celebration. Perhaps someone will ask you a question about the Revolutionary War. A bit of research and the answer can be the basis of an article. Think about five to seven little know facts about the founding fathers. I saw a survey on the news that said 22 percent of those surveyed didn’t know what country we fought against for our freedom. Seems as if everyone should know these basics, but obviously they don’t. Maybe instead of little known facts, you could use this survey and write up an article about the “basics facts” everyone should know. Be creative and you will have an article an editor will want—next year.